The looming 12-foot tall robot Dextre (pronounced "Dexter") just hitched a ride on the Space Shuttle Endeavour to be assembled on the International Space Station. When he's put together, the Canadian robot will be able to take on high-risk activities, like changing out components, that would otherwise require a spacewalk by the astronauts. Dextre's arms can extend out 11 feet, and each arm has seven joints, allowing him to position his gripper hands and built-in socket wrenches in all sorts of hard-to-reach spots. Click through for a diagram of Dextre, plus a video of Dextre dancing. 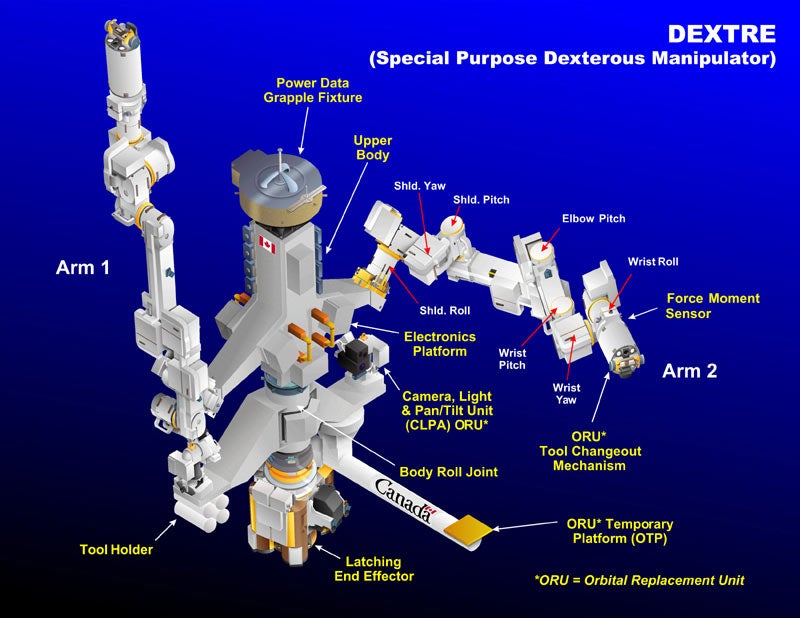 Tony Stark Was Right About Something for Once

Baby Born on Flight to London Gets Lifetime Ticket From Airline

Canada... saving the world through Improv and robot arms.

In a semi-related note I'm shocked this hasn't spiraled into an "America so does not suck" post fight.

The Muse
The Revision of Paris Hilton's Story Is Missing Something: Her History With the N-Word
Rich Juzwiak
Yesterday 1:50PM
Jalopnik
You Can Get A Brand-New BMW X5 With A 6.2-Liter GM V8 Engine In Vietnam
Justin T. Westbrook
Yesterday 3:45PM
Music
A new collection reveals Prince’s artistic scope at the height of his powers
Noel Murray
Today 1:00AM
G/O Media may get a commission
Mophie Powerstation 4,000mAh Power Bank (2-Pack)
G/O Media may get a commission
Studio by Belkin 10W Wireless Rapid Charging Stands (2-Pack)
More from G/O Media
Read on
Surprise, Surprise: Trump's Top SCOTUS Pick Promises to Be a Disaster for Abortion Rights
Read on
Nvidia Sorry That Bots Bought A Ton Of RTX 3080s
Read on
How to Apply for a Job That Pays $50K to Explore National Parks
Read on
The First WandaVision Trailer Is Totally Bonkers and You'll Love It